This is indeed A Strange Country 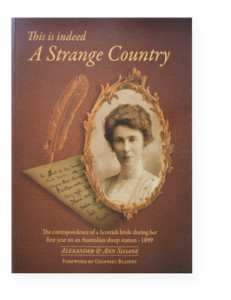 This soft-cover book of 218 pages includes over 200 family photographs, sketches, maps and document facsimiles to accompany the text of remarkable letters written in 1899. “A Strange Country” offers a graphic and intimate look at pioneering pastoral lifestyles, through the discerning eyes of a literate and intelligent young Scottish woman.

Almost 40 years ago, Ian Sloane took a tour of the Yarrawonga Mulwala Historical Society through the still-furnished Mulwala Homestead. Prior to the tour, Mr Sloane produced a leather bound book entitled ‘Australian Letters – 1899’. He stated, “This is a book I can’t let anyone look at, because it is so private. My mother describes all the people and that’s why I can’t let you look at it, as she says exactly what she thought about everyone & everything.” Mr Sloane also knew of her frank opinions of Yarrawonga, and these could have caused offence. But he finished by saying, “The book will come out some day”. And after 115 years, this unique collection of letters is now available.

The bound book held by Ian Sloane contained all the letters Jean Sloane wrote to her London-based Scottish family during her first year of living at Savernake Station, which was the northern section of the 20,000 hectare Sloane enterprise. She had emigrated in 1899 with her recently wed husband William Sloane. They had met two years earlier when Willie competed with the Victorian Team at the Bisley rifle shooting competition near London.

‘This is indeed a Strange Country’, aptly illustrates the challenges and unexpected trials that Jean encountered. Plagues of insects, wild dust storms, the ravages of drought and the difficulties of isolated bush life were a world away from her former life in comfortable upper middle class London society. She found herself enmeshed in a large family of in-laws, their friends and acquaintances, staff and strangers. Every day she learnt more about the operations of a pastoral enterprise, with its dependence on rainfall, commodity prices and meeting practical challenges. Her faith sustained her through many trials. The title is a direct quote from one of Jeanie’s letters. Jean’s first sighting of Australia from the ship included a bushfire, and a horrific storm in Bass Strait almost wrecked their ship. Such was her introduction to Australia, and the adventures continued…

In his foreword to the book, Professor Geoffrey Blainey states, ‘It is a valuable chronicle of daily life for just one year, of the things that happened every second day. In Australia, she saw the landscape, seasons and a way of life with fresh eyes’.

This book is a noteworthy and valuable piece of Australian history, as well as an intimate portrait of the challenges and pleasures of families on the land. This is not an arbitrary collection of correspondence – it is a living, vibrant narrative of Australian social history. Some of the locations of which Jean writes are now on the register of the National Estate.

Alexander & Ann and their children have built the book into a family project, their daughter Merridy typing out the original manuscript, son James helping with technological aspects, and daughter Hilary designing both the cover and layout.

“I loved the book “This is indeed A Strange Country”. I recently received it… for Christmas and couldn’t put it down until I’d finished it. … It was particularly interesting to have so many photos included in the book. It added so much to the impression of the way of life and cemented the relationships i.e. who was who in your family and in the houses.”

“I found it such an interesting read, and enjoyed her discovery and wonderment at the different life she found at “Savernake”. She describes it so well as she explains it to her family. I can’t believe that so little has changed – flies, dust storms, locusts, drought, moths, foxes, rabbits (although they are not quite so bad these days) etc. You have also preserved an historical account of living and social conditions of the time – shopping, mail, no refrigeration, transport, church etc.”

“Putting the wonderful story of Jeanie and Willie together in such a beautiful book has stunned me. Congratulations are in order to all of you for what you have achieved! You’ve made accessible to all, a story that deserves to be told… A love story in fact! Only the hardest of hearts surely, could fail to see the motivation and encouragement to be found in the lives of those two special relatives of yours.”