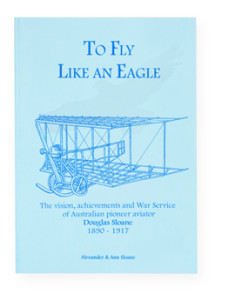 The vision, achievements and War Service of Australian pioneer aviator Douglas Sloane 1890-1917.
An inspirational biography of one of Australia’s earliest aviators. With rare ingenuity and determination, this young man persevered with his boyhood dream of “flying like an eagle”.

The flying abilities of the magnificent wedge-tailed eagle of his home property inspired Douglas to design and build his own airplane, working with his considerable engineering skills but basic materials.

Getting Off the Ground

“The swamp in the centre of this plain was as dry as a bone, and had been chosen as the best area for an airstrip. Douglas walked around to the front of the strange contraption he had towed out behind the car. He strode to the propellor at the front of his home-made biplane, and after he adjusted the throttle on the engine, he spun the blades, which immediately set off a loud roar as the engine burst into life…”

“When World War One broke out in Europe, Douglas joined the Australian Flying Corps. After a brief training period at Point Cook near Melbourne, he was sent to England, joining the 69th Squadron R.F.C. at South Carlton training base near Lincoln. During his training as an air mechanic, he corresponded frequently and in detail with his family in Australia, as did his brother Alex, also fighting in Europe.

Alex’s letter detailing his eye-witness account of the last flight of the “Red Baron” von Richtofen is a gem. Douglas’ letters and photographs are frank, humourous and detailed, not being restricted by wartime censorship. The aftermath of his fatal aircrash is portrayed sensitively in this book, to which many families who’ve suffered loss in war will relate.”

“All in all, this book provides another valuable resource. The Sloane’s have published it as a private venture with all the difficulties that involves. They are to be congratulated on a fine effort and I have no hesitation in recommending “To Fly Like an Eagle” to our members. The book is a valuable reference to a neglected segment of Australia’s aviation history.”